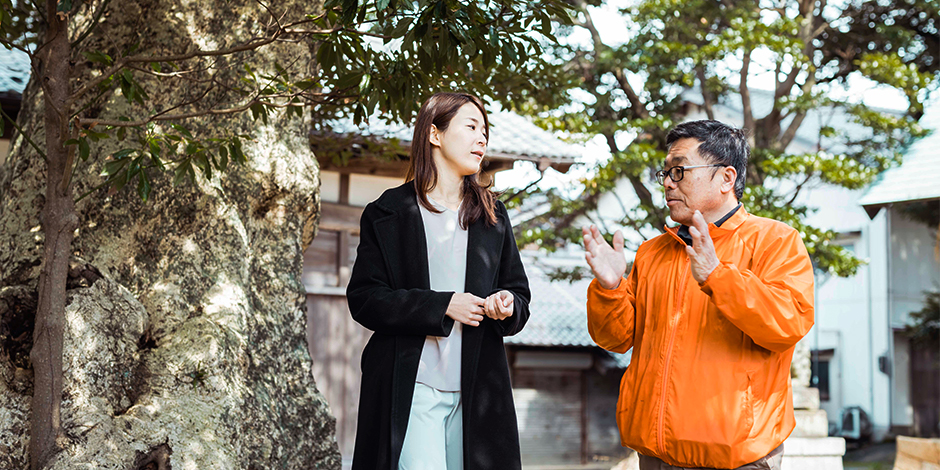 Maizuru is a city in Kyoto Prefecture with a population of about 80,000. This municipality launched a project to revitalize its community by forming a partnership with OMRON. As introduced in Part I, the project aimed to create a system for restoring the relationship of mutual assistance, which seems to be lost in the modern age. For this project, OMRON Corporation's Innovation Exploring Initiative HQ (IXI), which is tasked with creating innovation to address potential social needs, assumed the role of the hub.

One of the features of the Maizuru Project is that its team consists of a diverse variety of people. From OMRON, nine members joined the project team, including project leader Miki Yokota, who was introduced in Part I. The team also includes Michie Uno and Kazunori Saijo, both tasked with designing business concepts at IXI. Other team members include specialists in renewable energy such as solar power, and infrastructure monitoring such as surveillance of rivers. The team also includes experts in public relations and other areas.

Michie Uno (left), is a business concept design specialist,
and a key person in promoting the Maizuru Project

From the beginning, it was difficult to set up a cross-divisional project team because of barriers between business divisions. This is an issue that is typical of a large enterprise such as OMRON. According to Uno of IXI, "Our weakness in cross-divisional linkage caused a wasteful situation at OMRON. Although individual members were very talented in their respective fields, OMRON couldn't combine their capabilities together."

She continues, "IXI provides a platform to promote innovation driven by social needs by setting up a cross-divisional team, which was formerly difficult to realize. This is the most important role of IXI."

Project leader Yokota adds, "IXI is a cluster of various talent, technologies, and information. With the Maizuru Project, we are challenging ourselves to creating a system for residents to help one another. We were able to identify this challenge because IXI assigned specialists in different fields as members of our project team, leveraging their extensive personal connections both in and out of OMRON."
As both members stressed, the presence of IXI itself is serving as the driver for the Maizuru Project.

Providing full support for "trial and error," which is the basis of innovation

Kazuma Tateishi, founder of OMRON, was committed to the challenge of creating innovations to address potential issues of society as a startup company. However, as OMRON's business grew, the trial-and-error process tended to occur only along the extension of existing businesses. OMRON realized the need for going back to basics, and sought to increase the frequency of trial-and-error experiments for the OMRON Group as a whole by transcending the boundaries of business divisions. This is the background of IXI, which was established to serve as the innovation platform for all divisions of the OMRON Group.

"Innovation can arise only from a trial-and-error approach, and IXI is an organization that provides full support for this approach, because it serves as the basis for innovation," says Kazunori Saijo, another IXI specialist who joined the Maizuru Project.

By incorporating knowledge and ideas contributed by members in a wide range of fields, issues can be explored from a broader perspective and addressed from new angles. With the Maizuru Project, the identification of issues began with an overnight camp involving Maizuru City officials and OMRON members. There, they engaged in lively discussions on a range of topics with different degrees of scale, from the lack of streetlights to natural disasters to the decreasing population. The team members also listened carefully to feedback from members of the local mama volleyball team and elderly residents.

After these activities were initiated, all team members including Saijo attended meetings twice a week for two months to make hypotheses based on the issues of Maizuru City. They then thoroughly verified the validity of each hypothesis.

"Creating various hypotheses and repeatedly verifying them let us clearly identify the negative spiral that Maizuru City was experiencing. The drop in earning power of local industries and the decreasing population caused tax revenues to decline, while the aging of the population placed an increasing financial burden on the city. All these factors together will eventually make the city unable to provide residents with sufficient public service," says Saijo.

Kazunori Saijo gives a presentation to other members of the team.
Members repeated their hypothesis-making and verification, and had ongoing discussions.

After three months of planning, the team defined the desired form of Maizuru City in 2030. Starting from there, they backcasted to identify necessary solutions, focusing on five themes: Energy, Cashless Economy, Town Security, Health, and Harmonious Coexistence, which were also mentioned in Part I. In particular, "Harmonious Coexistence" was a theme that could not have been developed without experts from a wide variety of fields joining forces.

Serving as an OMRON Group-wide platform to create innovation driven by social needs, IXI is committed to driving the evolution of OMRON itself and generating new value. In which direction will the Maizuru Project be heading? Is it possible to take the knowledge and expertise accumulated through this project, and spread it to other municipalities across Japan as well? The endeavor to meet this challenge has just begun.

Recent years have seen a rapid rise in the popularity of eSports, which is now played for the health promotion of the elderly and as a recreational event for corporate employees. With player numbers t...

On November 5, the fourth China International Import Expo (CIIE) had its grand opening in the National Exhibition and Convention Center (Shanghai). As a global manufacturer of industrial automation co...