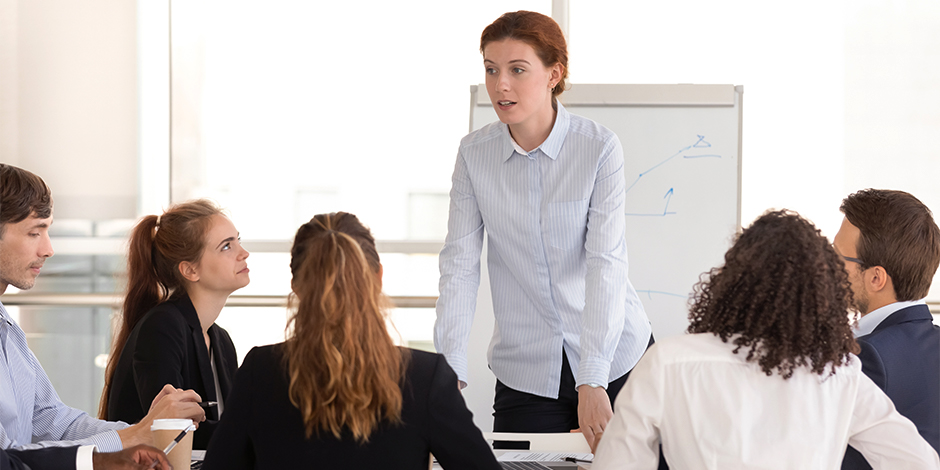 A Place Where Roles Expand Upon a Growing Network of Partnerships

For a variety of organizations the cultivating of next generation leaders is an extremely important task. It is, of course, preferable to give everyone equal opportunities in their active involvement in the workplace. OMRON aims to be an organization that allows the variety of ideas held among a good mix of personnel to flourish regardless of things like sex, race, religion or nationality. One way in which we are working towards the promotion of diversity is by globally conducting training to urge women to be active in a variety of ways. What are participants getting out of this training is the question we ask. And we are pursuing the answers both domestically and abroad.

"Because I've never done it before..." - Competent Yet Passive.

OMRON's global training program, "Women's Leadership Training", is being conducted across the Americas. The training is not just focused on practical things like the improvement of presentation skills but it also provides the opportunity for new female managers to learn how to optimize their work-life balance as well as how to approach their individual careers. In 2017 we started with a scale of 30 employees. Without limiting it to just managers the plan for 2019 is to enlarge that number to 250 by targeting all female employees.

According to a survey by Development Dimensions International, or DDI, an American leadership consulting company, women tend to be severely risk-averse due to a fear of losing their jobs. Regarding this Jen Kilman, Talent Development manager for OMRON Management Center of America, puts it this way, "When men are applying for a position that includes tasks they have never done before, they approach it that they know they could do it and continue to apply for the position. When women are applying, if they see something that is required they have never done, they may say they are not qualified since they have not done that before and not apply. Based on these two different tendencies, it would be effective to utilize appropriate coaching techniques in training women in leadership skills."

According to the DDI study the difference between the risk tolerances of men and women is over 11%. Inherent to the Women's Leadership program is the cultivating of a risk-taking mindset by the raising of risk tolerances through trial and error efforts. If one can take on challenges fearlessly, the range in which one can operate will expand.

"Women's Leadership Training" is not just conducted in a lecturing fashion but also incorporates the breaking into of small groups and the sharing of experiences. Liz Lopez, Automation Training Supervisor, one of the participants in the program, says she gained a lot from the training but the most lasting impression she received was realizing that "in everyone's respective organizations they each shoulder some kind of a role and that each one of those roles is important.

"I learned to see that I don't work alone. I became able to actively involve myself in not just the personnel department but in departments like sales and engineering as well for the best results. And as an instructor I became able to execute tasks at a high level." (Liz)

This kind of mindset is cultivated through training in the understanding of five networks. That is, the teaching of the importance of how one's ideas, career, influence, development and one's broader social surroundings interconnect.

This understanding is indispensable for a leader who proactively gets involved with others as she is engulfed in the forward motion of a project. And for women to fearlessly take on risk at work one more thing is important.

Similar initiatives are taking place in Japan. In the past, even though OMRON, through various systems to make women involvement easier in a workplace environment that was 80% male, there were many instances in which opportunities were firmly declined siting various reasons like "I don't have the confidence to be a leader" or "It seems too hard".

In response, in 2013 OMRON put up the goal of raising the percentage of domestic female management 5% by the year 2019. And, almost as if in anticipation of that pledge, the "OMRON WOMEN WILL PROGRAM" was begun in 2013 in order to provide the opportunity for female employees to exert their strengths through learning and awareness.

We invited female employees from all over the country and on five occasions implemented a 10 day curriculum. The program was made to function as a place where participants can make their career objectives clear, bolster their wills and skills and forge a network in pursuit of those objectives. Domestic network building first starts with sharing concerns over things like risks and assertiveness with colleagues who have the same feelings. The exchange with colleagues urges people to move ahead with confidence.

With the marked results of having turned out around 200 "graduates" of the program the goal of raising the number of female managers by 5% will be achieved in FY2018.

The chief of the Human Resources Development & Diversity Promotion Department, Uemura had this to say: "The curriculum for the 'OMRON WOMEN WILL Training program' is one which leads to practical equipping and the building of confidence. Initially, the idea of a women only training program was unpopular and even female employees targeted as potential participants gave negative feedback. However, after actually doing the program it seems as though the act of meeting like-minded women and collectively tackling issues is a good stimulation. Some have also said that through the program they have become able to change company expectations from pure pressure to pressure they'd like to respond to."

In the last part of the training there is a section called the "EGAKU" or "Drawing" program. It's an experiential style program intended to foster non-cognitive skills like self-awareness, creativity and versatility. Participants express in drawings their answers to the question "What kind of leader do you see yourself being in five years?"

"The things everyone is drawing, the rich diversity of directions. Every time when I look at pictures drawn by participants, I experience a heightened desire to realize their vision." (Uemura)

With no favoritism played upon those who have taken the training, those who afterwards have displayed their skills in the workplace are evaluated appropriately based on company-wide standards and are promoted accordingly.

"There are some who have said 'I had a fixed way of thinking how a leader should be but the training has helped me to expand my vision towards work and take some pressure off my shoulders.' It seems like people have been given a good opportunity to reflect on their own development and to consider how to utilize it for contributing to the company." (Uemura).

And it's said that just having those people you have individually shared your future self with is itself a support from then on.

OMRON aims to give everyone who works the ability to play active roles as they display their individuality and skills to the fullest. They don't just simply have an easy "work system" but they are also in the process of building a global environment where, as career development for women is supported, they also equip them with the confidence to move ahead.

Inspired with the motto "No charity, but a chance!", OMRON, has been continuously working towards creating & strengthening a more diverse & inclusive workforce. The organization operates two p...

Creating the Future of Diversity & Inclusion