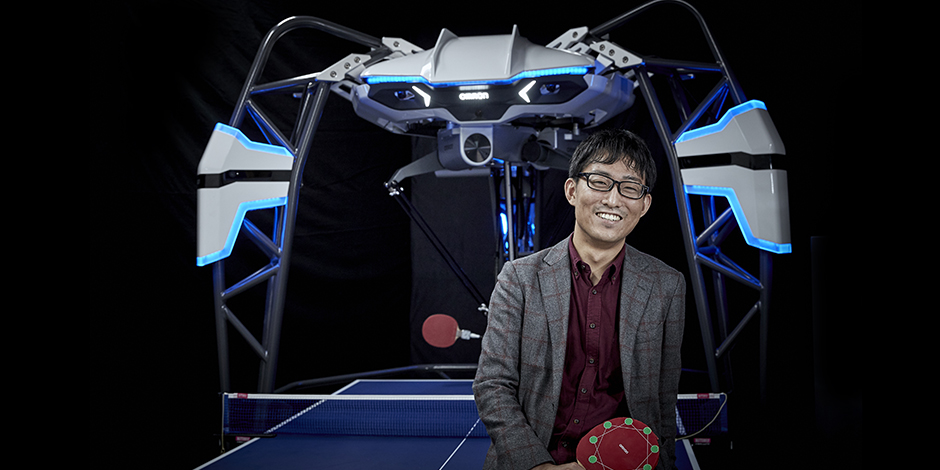 A future that makes people happy through human-machine collaborations

An interview with developers of FORPHEUS, an ever-evolving table tennis robot [Part II]

A development team in which one person's problem is everyone's problem, not the problem of "someone else"

Interviewer: This development project involves a combination of OMRON's image processing, control, artificial intelligence, and other technologies. As such, members of the project team came from different departments. Did you do anything special to make such a mixed team function smoothly? What do you think is the most important thing to make this happen?

Yase: Our team is composed of members who came from different departments, such as the AI Control Lab, Vision Sensing Lab, etc. so we consider communication to be most important. As such, our development environment is designed to enhance communication. The desks of all members are set up within a single area, which also includes a whiteboard and FORPHEUS. In this environment, if someone gets stuck working on an algorithm, other members come one by one and join in a discussion. Nowadays, research for control and vision technologies is done by separate teams, so they don't usually support one another. But in our team, anyone's problem is the problem of all members, not the problem of someone else. Our team is filled with a spirit of cooperation that allows the entire team to head toward a shared goal, and all members to collaborate with each other.

Team members engage in a discussion in front of FORPHEUS

Asai: Because this team mainly consists of young members, communication is smoother and easier, which is good. On the other hand, not many members are familiar with the development process. I'm the most experienced in involvement with the development of the table tennis robot, so I had an especially strong determination to provide the necessary follow-ups for members of this recent development team. I tried to maintain an attitude of speaking to other members as much as possible, to ask if someone was having trouble with something or check if a member's action was aligned with the team's goal. Sometimes, I had to be slightly hard on members.

At the Keihanna Technology Innovation Center in which the development team works, three ping pong tables are located in front of the dining room. Rallies played here also help facilitate communication among the team members.

Interviewer: I now understand that it is important not to turn any problem into someone else's problem. But the number of people who join in one place is limited, so doesn't that situation narrow your perspective on thinking?

Yase: Yes, that's true. To overcome limitations in terms of physical distance, we make use of digital tools. Specifically, we use an in-house network to exchange opinions and ideas with veteran researchers. We also have an open bulletin board forum for the table tennis robot in which former development members can also participate. If someone posts a comment such as: "I found an interesting technology," or "I have updated this part," he can get advice or feedback.

Interviewer: The use of digital tools lets you overcome physical barriers. Also, it should be able to facilitate smooth transfer of knowhow acquired in the past, I would assume.

Asai: Actually, that's not the case. Although there are records regarding technologies studied in the past, we don't have a stock of detailed knowhow that applies to our current project. We are more focused on taking on new challenges rather than making improvements on past developments, so we avoid relying on past developments.

Yase: Also, OMRON expects us to accelerate the speed of evolution so that past technologies will become legacies, instead of spending time carrying on traditions.

Asai: We want to get rid of anything unnecessary. In that sense, social networks are useful for having communication with knowledgeable persons when adding new functions, rather than when verifying past programs.

A goal we can aim for only with human-machine collaboration, not with human-human or machine-machine interactions

Interviewer: When it comes to gaining a new insight, we heard that you have worked with open innovations with other research organizations such as that of a university.

Yase: Yes, we developed coaching technology jointly with a university. Gaining a new insight is one of the reasons for open innovation. But we also think it is important in widely spreading our vision "harmony between humans and machines" throughout the world. There is still no such world in which humans and machines are in complete harmony, so there is no correct answer available yet. By promoting this project by involving people with diverse knowledge bases and sensibilities, we can make our table tennis robot closer to one that more people can relate to.

Furthermore, by conducting research together with high-tech researchers, we expect to discover new applications for the technologies we have acquired through the table tennis robot.

Interviewer: In addition to showcasing OMRON's flagship technologies, I see you are also thinking about rolling them out.

Asai: The OMRON Principles state that one of "Our Values" is "Innovation Driven by Social Needs." The idea is that we are looking not only to develop advanced technology, but to help create a better society by promoting its use. Five years have passed since the start of our table tennis robot project, and the technologies for this robot have matured. With this in mind, we started thinking about how to release these technologies to the world in some way. Needless to say, further advancing these technologies is essential. But now I aspire to evolve FORPHEUS in two ways--one is further polishing its technologies and the other is implementing these polished technologies in society.

Interviewer: I see Mr. Asai is aiming to contribute to society by releasing the table tennis robot technologies as a company. How about you, Mr. Yase, what is your ambition as the leader of the development team?

Yase: With the fifth generation FORPHEUS, we were able to simulate the motions of a human elbow and wrist. If this technology is advanced further, we would be able to achieve more natural and agile human-like motions, or more precise and sophisticated movements. The result would be a robot that is almost human.

By the way, I feel something every time I participate in an exhibition--that is that there is hardly any robot that stirs people's emotions as much as FORPHEUS. When the robot scores during a rally, one player gets chagrined while the other one admires his playing skill. The reactions they show are emotional and diversified. I met a person who even said, "It's more fun to play with FORPHEUS than to play with my friends." Observing these people makes me feel that FORPHEUS could be a symbol that encourages people to have a positive outlook for the future of the human-machine relationship. I also believe that there is a goal we can aim for with human-machine collaboration, not with human-human or machine-machine interactions, and I'm confident that achieving that goal can make people happier.

Interviewer: Is there a specific goal you can envision?

Yase: As far as table tennis is concerned, our goal is to equip FORPHEUS with coaching skills that can improve beginners' skills much faster than a human coach. For instance, we aim to enable beginners to play as well as an expert in a mere three months, or allow beginners to get the feel of returning smashes hit by a pro. I think there is a bright future for the relationship between humans and machines as an extension of this direction of development. I want to prove with FORPHEUS that anyone can continue a rally with an advanced player on an equal basis if the rally is between a human and machine.

Our eventual goal is to instill such technology into the everyday lives of people and throughout society. When a robot like our table tennis robot that motivates people to grow becomes easily accessible to everyone, it might be the start of "harmony between humans and machines" in a real sense.