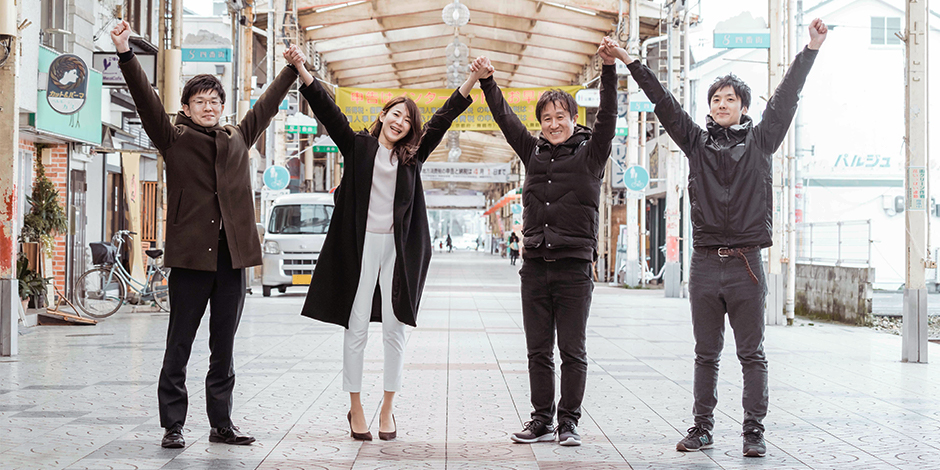 Can OMRON change a community!? Regional Revitalization Project toward 2030

Maizuru City, Kyoto takes on a new challenge toward creating an autonomous society (Part I)

OMRON recently concluded a comprehensive partnership agreement with Maizuru City in Kyoto Prefecture, a municipality with a population of about 80,000. The agreement was to initiate a project to revitalize the community by envisioning the desired form of society in 2030. The project, centered on a matching system with the aim of realizing mutual assistance, is the first attempt of its kind for Maizuru City, and for OMRON as well. The success of this project is expected to solve issues of not only Maizuru but all other regional municipalities in Japan. This two-part story series looks at how this project was developed and promoted. Mr. Masayoshi Konishi, Resettlement Promotion Office, Policy Promotion Division, Maizuru City and Miki Yokota, OMRON Social Solutions Co., Ltd. (OSS), central players for the project, shared their intentions and ambitions incorporated into the project.

Maizuru City is in the northern part of Kyoto Prefecture facing the Japan Sea. It is mainly divided into the Eastern and Western Maizuru districts, which together are home to some 80,000 people. Eastern Maizuru is where the Japanese Navy was once based, while Western Maizuru was originally the castle town of the Tanabe clan. The city has abundant tourism resources such as the Red Brick Warehouses, registered as a Japanese heritage site, and an observation spot for a state-of-the-art escort vessel. Nonetheless, Maizuru faces an issue typical to regional cities--a steadily declining population--although the city was once home to 100,000 people.

"The current population of Maizuru is 80,000, but is expected to decrease to 68,000 by the year 2030 if nothing is done about it," says Mr. Masayoshi Konishi of the Migration and Settlement Department of the Maizuru City Policy and Promotion Division. One thing clear to everyone is that if the population continues to decrease, it will cause the city's finances to decline, eventually failing to support the livelihood of its citizens.
Against this backdrop, Deputy Mayor Hiroshi Yamaguchi came across a newspaper article about a press conference that OMRON had conducted. The article was about the kickoff of OMRON SINIC X Corporation,1 a research company tasked with creating near-future designs, which was established in April 2018.

Besides the convenience of working with a Kyoto-based company, Mr. Yamaguchi felt that OMRON's advanced technology would be able to solve the issue they have, so he soon contacted OMRON. This was how this project began.

The project itself represented a new challenge for OMRON as well. So, the Innovation Exploring Initiative HQ (IXI), which is tasked with creating innovation driven by social needs, served as a hub to assemble members of a cross-divisional project team. This coincided with the launch of the OSS project of creating a Smart City by 2030. As such, Miki Yokota from the NEXT Business HQ of OSS was selected as the leader of the project team.

Maizuru City features many spots of scenic beauty, which are frequently used as movie locations.

Bringing the system of mutual assistance back to life

The members of the Maizuru project team held repeated meetings with Mr. Konishi and other city officials, and finally reached a conclusion--the need to create an autonomous society in which residents can enjoy enriched and fulfilling lives.

The autonomous society was what OMRON founder Kazuma Tateishi envisioned in his SINIC Theory,2 and this society would require both individuals and the masses to achieve self-reliance. Even so, no individuals or groups are perfect so they must help each other. The team concluded that offering something that can complement this mutual assistance is what OMRON would need to provide.

The team then further divided the key concept of "creating an autonomous society for Maizuru City" into sub-themes of Energy, Cashless Economy, Town Security and Safety Watch, Health, and Harmonious Coexistence. By so doing, the team decided to focus on realizing a harmonious society in which people willingly and readily help each other through a matching system.

Specifically, the team sought to create a harmonious society based on mutual assistance in a smaller provincial city through the development of a matching system that connects a person who is in need within the community with a person who can provide assistance. By so doing, the abilities to support and develop the community can be enhanced.

In regional communities such as Maizuru, the accelerated aging of the population with declining birthrates and the increase in double-income families have resulted in the need for help. Even so, the relationships of people fall in a limited sphere and people find it difficult to rely on those around them as they used to in the past.

Yokota explains, "In the past, people were connected more closely with each other and there was a system of mutual assistance within each community. In other words, a relationship of trust was established so that a person in trouble could immediately ask others for help. To have a better life in the regional community, we thought this relationship based on mutual assistance would need to be built again." Yokota had seen many of the issues typical for regional municipalities, while she traveled around Japan as part of her job of developing new businesses. While at the university, she also visited disaster-affected areas hit by the Great East Japan Earthquake every year, and saw that communities were broken apart. For this reason, she had a deeper attachment to this project than many others.

However, a conventional matching system is based on the assumed use in urban areas or overseas. It is apparent that directly importing this matching system into the community of Maizuru would prevent the evaluation system and the remuneration structure design from functioning properly.

"To overcome these problems, it is essential that each community has its own matching system that is suitable for its distinctive culture and environment, and that also reflects the regional market characteristics," says Yokota. "The key to success in realizing a harmonious society or a community in which people willingly help one another is to ensure credibility and design incentives."

Suppose that there is a mother who needs care for her child while she works (a person in need). Then suppose there is an elderly person who has parenting skills and spare time, and is willing to take care of the child (a person who wants to help). This project is intended to make a match between the mother and the elderly person, and create a system of mutual assistance. With this system, the mother can do such chores as shoveling snow, weeding, or sweeping the yard, etc. in return for having someone babysit her child.

"In local communities, people are in close proximity to each other, which can be both good and bad. But they recognize each other's faces, so we need to come up with a way to ensure credibility of the matching system by taking advantage of this closeness. In addition, we need to develop a system that allows people to feel like helping others," says Yokota. To ensure credibility of the system, it is important that the person who provides help is a person that the user of the matching system can trust with family or belongings. Incentives in turn must be designed to motivate the one who provides assistance to use this system.

Yokota concludes by saying, "Going forward, we aim to develop an app to enable this matching and conduct verification within the community by the joint team of Maizuru City and OMRON. There are no successful examples of a similar system available yet throughout the world, and nobody can guarantee its success. But what is important is how we take failure. If we eventually achieve success after repeated failures, these failures can be considered just a process for reaching success."

Yokota has earnest hopes for the development of this system, but there are many issues she has to address in creating a system of harmonious coexistence that does not pursue monetary benefits. It is obvious how hard that might be. A close distance between residents typical in a small city, and an exclusive attitude with a reluctance to accept outsiders may present problems. But once these barriers are eliminated, the team's efforts may possibly solve the issues faced by regional municipalities throughout Japan.

1 OMRON SINIC X Corporation is OMRON's strategic foothold that creates what OMRON calls "near-future designs." More than simply attempting to foresee the future, its goal is to draw a picture of the ideal future that OMRON desires to achieve, and that is practical in terms of implementation.
2 The SINIC theory is a future prediction theory developed by OMRON founder Kazuma Tateishi, who presented the theory in 1970 at the International Future Research Conference. Announced in the midst of Japan's rapid economic growth, before PCs and the Internet even existed, this theory drew a highly accurate picture of society up to the middle of the 21st century, including the appearance of the Information Society.