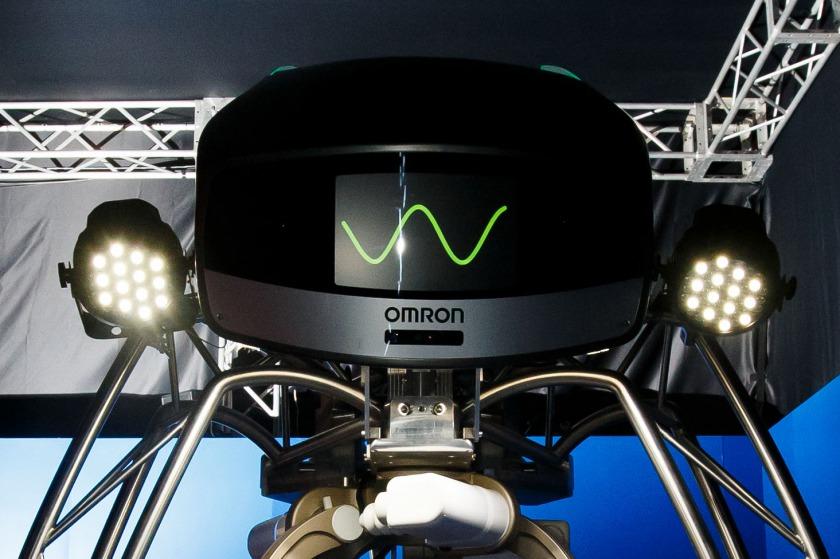 Mission: Develop in six months a machine that will work together with people to achieve a shared goal!

FORPHEUS keeps evolving every year as a state-of-the-art machine that presages a future in which people and machines live and work in harmony. Why was this robot created? What kind of evolution will he show this year? To answer these questions, the leaders who developed each generation of FORPHEUS will share the whole picture of its development.

To conceptualize a human-machine relationship for the future in a way that anyone can relate to, the table tennis robot was created as a machine that works together with people to achieve a shared goal, instead of competing with them. The development started with making the robot practice table tennis strokes without a table. It was the opening of the story of the evolution of FORPHEUS, and the creation of a new relationship between people and machines.

Shinji Kawakami, who supervised the development of the first and second generation FORPHEUS, talks about "How FORPHEUS was born."

In 2013, OMRON's in-house fair, called "OMRON Total Fair (OTF)," was held in China as a commemorative event for the 80th anniversary of the company's foundation. At this fair, OMRON aimed to unveil the OMRON Group's vision for the future, and the technologies that would make it possible. It was where our development of FORPHEUS started.
The OTF venue included an area presenting the future as envisioned by OMRON, and OMRON planned to showcase the human-machine relationship based on the SINIC theory, OMRON's original future prediction theory. I and the development leader at the time were assigned with a theme of portraying a future in which "harmony between humans and machines" would be achieved, and where people and machines work cooperatively together to achieve a common goal.
OMRON has a wide range of technologies to control a machine's movements, and the possibilities for expression are virtually limitless. So, many different ideas were brought to the table by the team members.

We thought the best idea would be something that would enable Chinese customers to easily understand the complex technologies, while at the same time entertaining them. One person said it would be fun if a robot could perform an acrobatic feat like the Chinese acrobatic show. But such a robot would not allow people to join in the experience. So we chose the theme of "table tennis," which would enable interaction between people and the robot. Table tennis is one of the most popular sports in China, so we thought Chinese customers would enjoy playing it with our robot.

How the development of the table tennis robot began

After we chose table tennis as the theme of development, many challenges faced us. The OTF was set to open in October in Beijing, and there was no way to postpone the schedule. It was already April when we decided on the theme, so we had less than six months to spend for the development process.
Having a robot play table tennis--OMRON had never done that before, and no one else had either. We initially had a question, "Can a robot hit the ball back to begin with?" but the development leader managed to overcome this challenge. Because we had to transport the robot to Beijing, we created two robots--one to be displayed at the fair and another one for debugging called the "debugging machine." The robot to be displayed was shipped to arrive in China before the end of August. While the robot was being transported, we developed software using the debugging machine. We then sent a completed program to Beijing and loaded it onto the robot there. Once the robot started to play, to our surprise, the robot's arm came off! We called it a "dislocation" just as you would for a human injury. (laughs)

The initial robot with the dislocated arm

Analysis of the factors causing this problem made us discover that the way the robot vibrated was different from that of the debugging machine. We discovered this a mere week before the opening of OTF. So, we made adjustment after adjustment at the warehouse in Beijing until the very last moment, finally finishing it on time.
The OTF fair traveled around various cities in China, serving as the first opportunity for many people to have a hands-on experience of "harmony between humans and machines" that OMRON has envisioned. This experience also helped us realize the improvement points to be incorporated into the next-generation FORPHEUS.

It was 2013 when OMRON presented what the future human-machine relationship would look like, in a way that could be experienced by anyone. The robot received rave reviews worldwide partly due to its unique ability to play table tennis with a human player. But what this robot represented was not only uniqueness, but a new human-machine relationship, which will soon be realized. This made us ask: "What will the machine mean to people in the future?" and "What will be necessary to make such a relationship a reality?
FORPHEUS will keep answering these questions through its evolution.