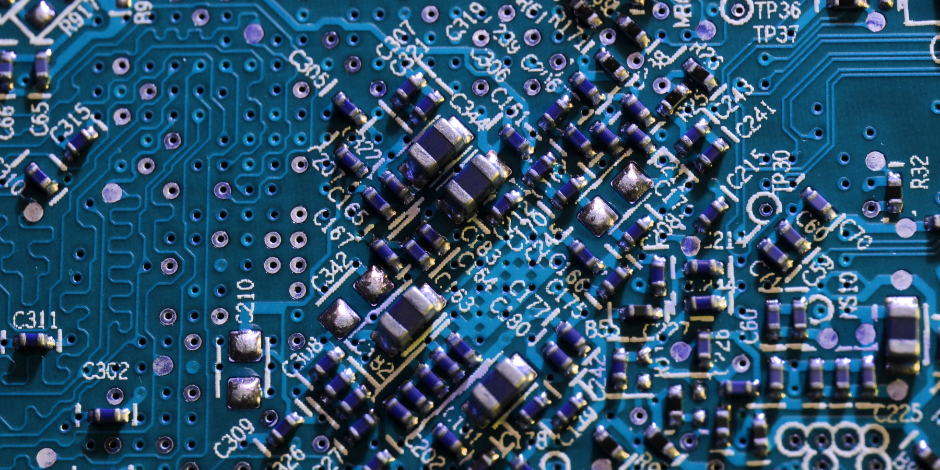 Nvidia launched the latest version of its Jetson Xavier chip module, which is essentially a server on a chip that handles all of the AI processing, imaging, and other computing tasks for autonomous drones and robots.

The new Nvidia Jetson AGX Xavier module will be used in everything from delivery robots to inspection drones, said Deepu Talla, general manager of autonomous machines at Nvidia, speaking at an event at the company's new headquarters in Santa Clara, California.

Nvidia now has five variations of the Jetson chips that it first introduced in 2015, and the newest one can deliver 32 trillion operations per second in performance. The modules use the latest Xavier chips with massive artificial intelligence capabilities and 20 times the capability of earlier Jetson chips. 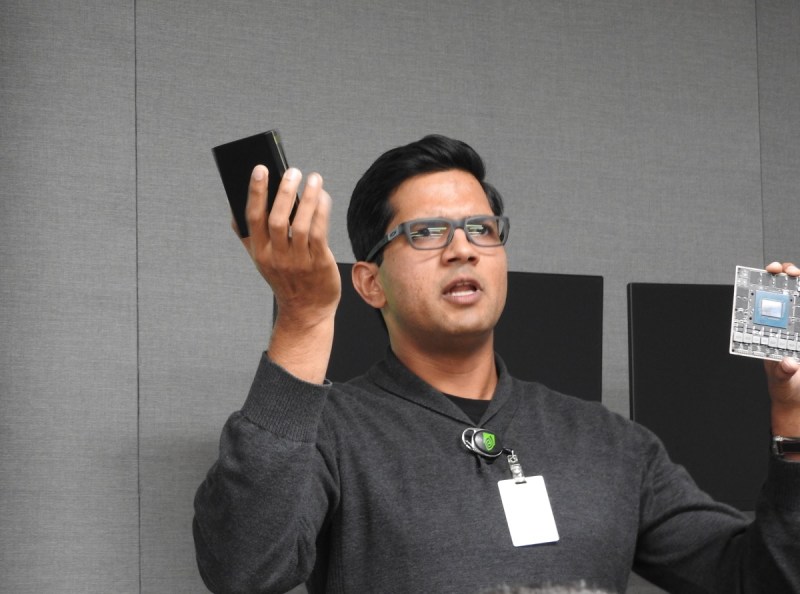 Nvidia is engaged with more than 200,000 developers in the Jetson ecosystem, about 5 times the number that it dealt with in the spring of 2017, Talla said.

Rob Csongor, vice president of autonomous machines, also said in an interview that there are applications for manufacturing robots that collaborate with humans, handheld DNA sequencers that help scientists save crops from disease, and video analytics machines that analyze 32 video streams at once.

"Delivery robots don't have to travel at 80 miles per hour, but they need processing to map a path on a sidewalk, detecting people, dogs, fire hydrants, and more, Csongor said. 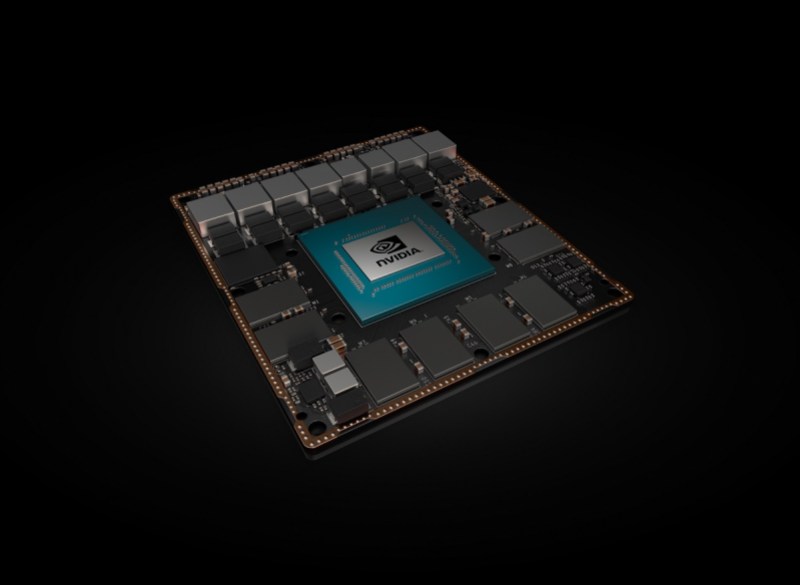 Above: There's more imaging performance in an Nvidia Jetson chip than a lot of desktop computers.
Image Credit: Nvidia

Prior models include the Jetson TX2 and TX1 family of products. At a Jetson meetup at Nvidia's headquarters, there were a lot of machines with older Jetson chips in them. But Wayne Diamond, a sales manager at aerospace firm Curtiss-Wright, said it would be a trivial matter to upgrade to Xavier with the company's modular computers for military uses, such as computer upgrades for fighter jets.

The Jetson AGX Xavier module delivers the performance of a workstation server in a computer that fits in the palm of your hand. And it consumes as little as 10 watts -- about as much as a clock radio. It offloads the task of building computing smarts into a drone, allowing developers to focus on applications like delivering food to people.

The new module leverages Nvidia's world-class AI platform, which is used for numerous AI applications. This includes a complete set of tools and workflows to help developers quickly train and deploy neural networks.

"What Nvidia announced and demonstrated today was a major milestone on a long line of work that was done and needs to be done to truly enable mainstream robotics," said Patrick Moorhead, analyst at Moor Insights & Strategy, in an email. "My biggest takeaway was that intelligent robotics and smart vision systems are finally being commercially used and are no longer a science project. Each successive Jetson improvement brings more edge features and utility, and I am excited about the future." 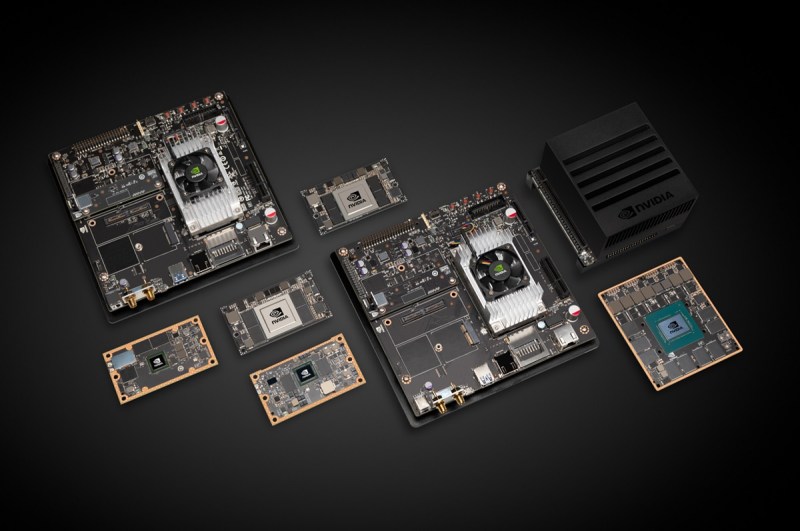 It supports applications developed with the JetPack and DeepStream software development kits. JetPack is Nvidia's SDK for autonomous machines and includes support for AI, computer vision, multimedia, and more.

The DeepStream SDK for Jetson AGX Xavier enables streaming analytics, bringing AI to internet of things (IoT) and smart city applications. Developers can build multi-camera and multi-sensor applications to detect and identify objects of interest, such as vehicles, pedestrians, and cyclists.

These SDKs save developers and companies time and money, while making it easy to add new features and functionality to machines to improve performance, Talla said. 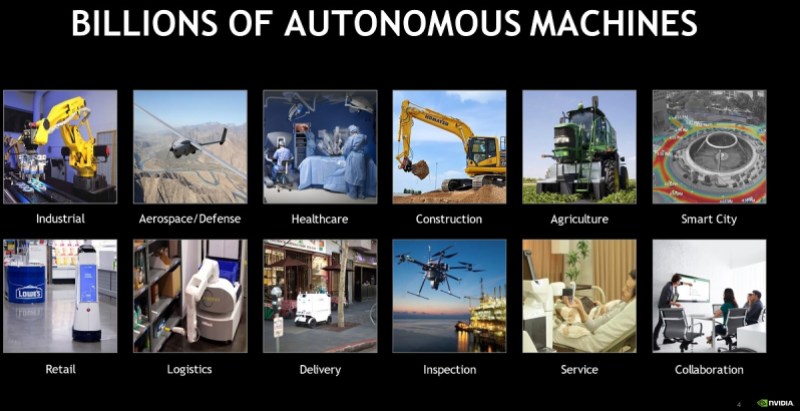 Above: Jetson powers drones across a lot of sectors.
Image Credit: Nvidia

With this combination of new hardware and software, it's now possible to deploy AI-powered robots, drones, intelligent video analytics applications, and other intelligent devices at scale.

The Jetson AGX Xavier is being used to handle DNA sequencing in real time for Oxford Nanopore, a U.K. medical technology startup.

And Japan's Denso, a global auto parts maker, believes Jetson AGX Xavier will be key to helping it introduce a new wave of efficiency to its auto parts manufacturing process.

Above: Nvidia has a lot of partners for its Jetson chips.
Image Credit: Nvidia

The Jetson AGX Xavier module brings accelerated computing capability to the Jetson family, which includes solutions at different performance levels and prices to suit a variety of autonomous robotic applications.

The Jetson AGX Xavier module is available today from distributors worldwide for $1,100 for quantities of 1,000 units or more. Nvidia has about 1,800 customers for Jetson so far.

Talla said the Jetson AGX Xavier can be used in devices that direct people where to park in large parking garages. Kiwibot was using older Jetson chips in a food delivery drone that carries food the last mile to people who order take-out from restaurants.

This article was written by Dean Takahashi from VentureBeat and was legally licensed through the NewsCred publisher network. Please direct all licensing questions to legal@newscred.com.

Research and Markets has announced the addition of the "5G - Extending Human Eyesight, Extending Human Senses: Market Shares, Strategies, and Forecasts, Worldwide, 2020 to 2026" report to its offering...

A new study in the Journal of Biomedical Informatics uses machine learning on unlabeled electronic health record (EHR) data to shed light on the emergence of cardiovascular disease (CVD). The study hi...

We Need a New Way to Measure Human Progress

(Bloomberg Opinion) -- At International Monetary Fund and World Bank meetings in Washington, there will be much debate about slowing global growth, the impact of the U.S.-China trade war, the role of ...