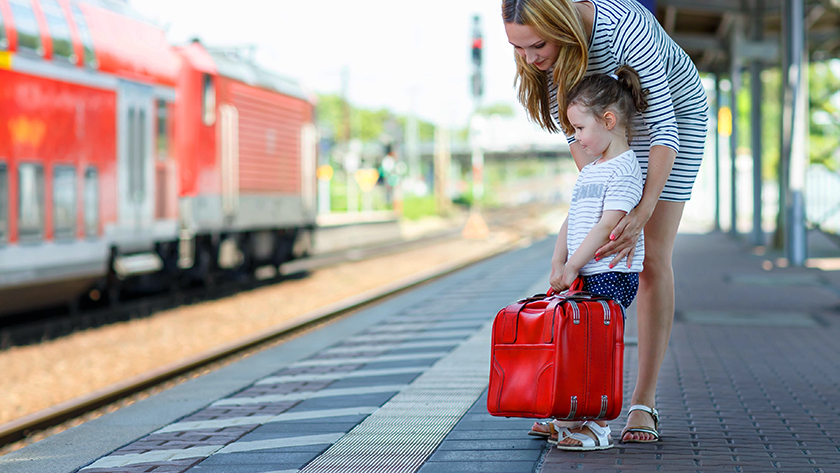 Designing a station that is safe for users of all ages

Trains are indispensable for our life. They are used for commute, shopping and travel during holidays, forming an essential part of people's everyday activities. As foreign tourists visiting Japan increases year by year, railway companies are working on the improvement of safety and prevention of railway accidents including falls from platforms.

SEIBU RAILWAY Co, Ltd. is a leading private rail company in Japan, with a history of longer than 100 years. Their group vision reads: "Engage in all businesses and services with safety as their foundation". SEIBU RAILWAY has introduced measures to ensure safety of their customers, including installment of equipment and systems such as platform doors and lights warning customers to watch their step.

This time, SEIBU RAILWAY has partnered up with OMRON SOCIAL SOLUTIONS as part of the new initiative to prevent accidents that happen in the gap between the platform and the vehicle.

This article will focus on the Araiyakushi-mae Station on the Seibu Shinjuku Line, where SEIBU RAILWAY and OMRON SOCIAL SOLUTIONS has started the trial using cutting-edge sensing technology to promote customers' safety.

"We have been taking measures to promote safety and warn customers of danger, but we could not reduce the number of accidents due to falls from platforms. We were in need of a new method to prevent these accidents. This was when we received contact from OMRON SOCIAL SOLUTIONS," says Mr. Satoshi Kimura, from the SEIBU RAILWAY Safety Advancement Dept., reflecting back on how the project came about.

Traditionally, the two methods to prevent accidents due to falls have been to install a platform door to prevent falling altogether, and to install a fall detection mat. However, the former method cannot prevent falls which happen in the gap between the vehicle and the platform. The latter method too, cannot solve this problem, as these mats cannot detect passengers that are caught in this gap and have not reached the ground.

To solve this issue, the team decided to consider the development of a system that could detect and activate a caution lamp when there are falls as well as when passengers that are caught between the vehicle and the platform. The project was the first of its kind.

Traditional detection systems made use of image recognition by cameras, but this had problems when it came to practical application. Cameras erroneously respond to doves and cats which enter into the detection range (the camera's view), leading to the decrease in accuracy of the detection system.

Faced with this difficulty, what OMRON SOCIAL SOLUTIONS proposed, was simply to use a basic laser sensor. OMRON had expertise in the field of laser sensing technology, and the accuracy of these sensors were higher than that of image recognition.

"We did trial after trial for two months, and amassed data and information using the sensor. The accumulated data, most notably, became the basis for the optimal algorithm that we developed. The accuracy of this algorithm is extremely high, allowing for recognition of the age and model of the vehicle and difference between the local and express trains," said Motoshi Bamba, Yoshinori Takata and Yoshimasa Sugitate, members of OMRON SOCIAL SOLUTIONS who led the project.

The decisive factor that allowed the accurate and precise processing of information gathered by the sensor is OMRON's core technology, "SENSING & CONTROL + THINK". Through use of this technology, the system could sense (gather information about the state of the platform from the sensor), think (judge the kind of events taking place), and control (display quickly the correct warning among the varied patterns of warning).

"We had been thinking, from before the project, about the possibilities of utilizing OMRON's sensing technology in the stations to promote safety and security. It's a pleasure to have been able to aid SEIBU RAILWAY with this project and achieve this goal," say the three who were able to bring into reality their hopes to utilize OMRON's technology for safety.

Takata, Bamba and Sugitate of OMRON SOCIAL SOLUTIONS (from left)

With the introduction of the system, lives of residents living along the railway are beginning to change

The reason why Araiyakushi-mae Station became the venue for the trial is its structure. The platform is curved, inevitably creating a gap with the rectangular shaped train.

The local nursery teacher, Ms. Tanaka, shares the concerns she used to have at the station.
"When I have the students with me, I would always lift them up. There is a gap between the car and the platform, and I was afraid they would fall into the gap. But they too have to learn to ride trains on their own. I'm relieved to hear that safety measures are going to be introduced."

The introduction of detection systems for falls into the gap between the platform and the train is reassuring for those who live and work in the areas serviced by the line.

"We are considering the installment of this system not only at Araiyakushi-mae station but also at other stations of SEIBU RAILWAY. In the future, we plan to further enhance safety measures for our customers using both platform doors as well as the detection systems for falls in platform gaps," says Mr. Kimura, with passion in his eyes.

The journey which sprouted from the wish to have customers ride trains safely has only started. The challenge by SEIBU RAILWAY and OMRON SOCIAL SOLUTIONS will continue.