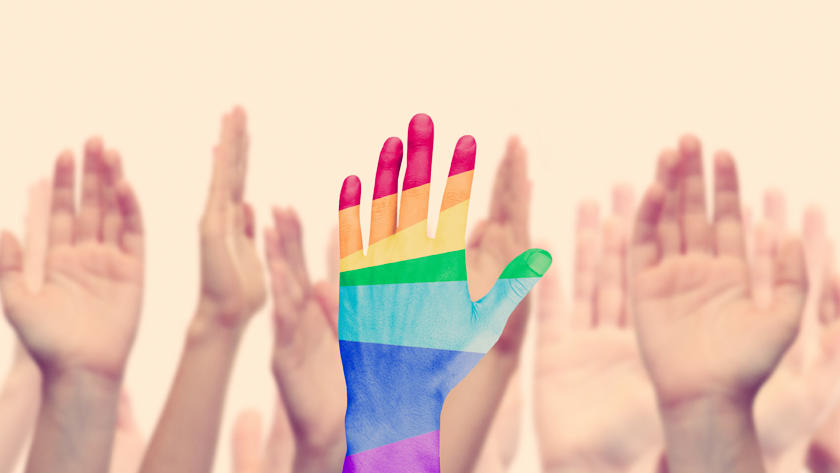 Creating a company where everyone can be themselves

"What is it to be masculine or feminine?"

In Japan's workplace, discriminatory expressions against LGBTs* still overflow in everyday conversation. To discuss workplace improvements to change this situation, the "work with Pride 2018" conference was held on October 11, 2018, at which members of the OMRON Diversity Promotion Section participated.

Learning about sexual minorities as the first step in LGBT promotion

OMRON's Diversity Promotion Section has been taking initiatives since 2012 to facilitate maximal performance of all employees. They first focused on women and people with disabilities, and in 2015, started implementing measures to create a workplace where members of LGBT can perform at their best.

What manager Uemura first did upon starting the LGBT initiatives was to understand what the term "LGBT" meant.

"In the beginning, although we were promoting LGBT, we didn't really understand what it was. So, we first tried to understand ourselves what the term meant."

After having learned the basics and the current situation, they needed to explore the various possible actions to take.

As a starting point for this exploration phase, they invited Ms. Muraki as lecturer for training of personnel affairs, general affairs and recruitment staff. Ms. Muraki is from the NPO corporation "NIJIIRO (rainbow) DIVERSITY," which promotes the creation of a workplace where LGBT members can actively participate.

This training was met with positive responses and led to creating a momentum for each person to start thinking about what they can do for LGBTs.

"The first thing we did was to make the toilet for wheelchair users in our building available for everyone. What started as one employee's suggestion is now spreading throughout the OMRON Group."

At first, the training was limited to certain employees such as those in the personnel affairs and general affairs department. However, they soon felt the importance of having more people learn about LGBT and the initiative was expanded to human rights training for all employees.

The implementation of such activities brought on some visible changes. For example, LGBT members began to consult the Diversity Promotion Section as well as their immediate bosses about their concerns.

One of the greatest concerns that working LGBTs have in the workplace is related to coming out. Not coming out to their bosses and colleagues signifies hiding their sexuality, an important part of their identity. In such a state, they may often feel stress in communication, etc. Moreover, they may feel as if they do not belong to their workplace, which can sometimes hinder their performance.

Through the training, prejudice towards LGBT members in the workplace has diminished. In turn, there is now a sense of peace of mind that others will be understanding of the problems faced by LGBTs.

"Each person is faced with a different trouble. We start by listening to each of them and thinking together," says Uemura.

She says that through such efforts, they have learned many lessons.

"Through the experience of implementing various initiatives, I have found out three things.

The first is that slowly the environment has improved so that individuals can receive in-house consultation if they wish. The second is to not label LGBT members as one big group, but to listen and respond to the each of them individually. And thirdly, that realizing requests of each individual may require time. Companies have their own circumstances such as budget for equipment investment and priority for different initiatives. We believe that it is important to build relationships of trust and to find answers together by sharing these circumstances as well. We are likely to continue to receive many consultations. We hope to face each of these cases and grow by thinking together."

Accept and progress together

The "work with Pride 2018" had participation from 153 companies and organizations across Japan.

At the conference, participants discuss improvements to the workplace environment. In addition, the work with Pride Index Steering Committee evaluates each company's efforts toward LGBT inclusion based on its own index.

OMRON was awarded the Gold award for the second consecutive year for the enlightenment and promotional activities for LGBTs mentioned in this article.

However, although efforts for LGBT were approved this time, they believe OMRON's initiatives are still under development.

The proportion of LGBT people in the world is 6 to 8%. For them to work creatively without feeling conflict and oppression, the workplace must continue to evolve. We must also consider those outside OMRON such as students who wish to newly join the company and our clients in addition to those within the company.

We will continue to promote LGBTs, to create an environment where everyone can demonstrate their individuality and work freely. This will lead to fueling our power to create new value. OMRON will continue its evolution.