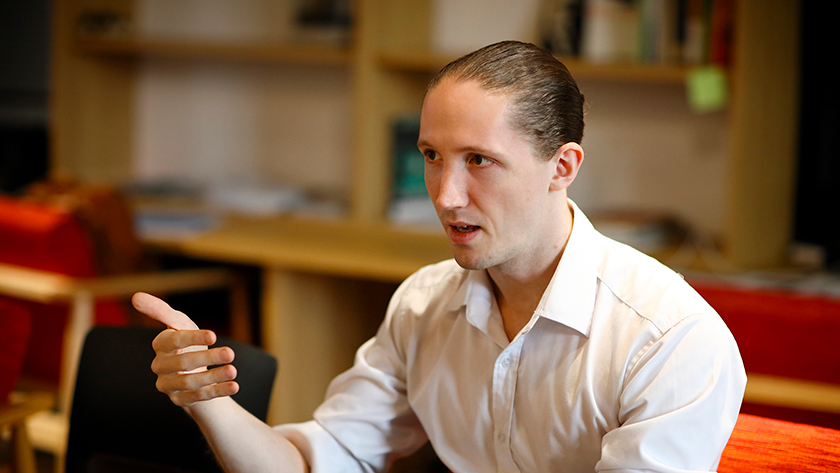 I want to broaden the potential of robotics for industrial solutions

Technology to bring a robot closer to a human hand

From factories to parcel delivery services to the medical field, the opportunities in which robots are active in our lives have increased in recent years. With things like the debate over how much robots in the future will substitute for the jobs carried out by humans, the relationship between humans and robots has become closer than before. OMRON aims to broaden the possibilities of robotics and, in a variety of settings where they can be active, create a society for "harmony between humans and machines". It is a society in which machines draw out the potential in humans to help them live and work more creatively.

OMRON SINIC X Corporation (OSX) is the company that will plan out and develop technologies to realize such a society. One member of the team who has been taking up challenging work in robotic hand research, Felix von Drigalski, will be participating in the industrial robotics category in World Robot Challenge (WRC) in this October 2018.

We heard from Felix on his thoughts on robotic research and what he's looking forward to at the WRC.

The goal is to get robotic hands closer to human hands

--First, please explain what it was that piqued your interest in robotic research.

Felix: Robots started appearing in Sci-fi movies from the 1950s. I wasn't born then. When I got old enough to understand things I took for granted the idea that by the time I became an adult robots would be taking the place of humans in doing work for us. They were by this point supposed to be doing things like washing and folding clothes and taking on jobs that we felt were a bother to do but....

-- ...Unfortunately that isn't the case.

Felix: That's right. That's why I thought I'd do robotics research. Plus I'm lazy. I want robots to work in place of me. That's how I thought going in to it.

-- It seems you are primarily doing research on robotic hands.

Felix: Robotic hands can't even come close to human hands. With robotic hands it's hard to tell whether they are securely grasping an object or if it's going to slip out. With hard things like metallic objects it can be done but it's hard to tell with soft things like fabric. Even if we install a camera with the latest in image processing technology, we haven't come to the point where a robot can correctly distinguish a crumpled up cloth and imagine what it is.

-- On the other hand just what kind of thing is the human hand?

Felix: There are a great number of sensors on our fingers and on the palms of our hands. Our finger tips abound in flexibility so that no matter the range of objects we come in to contact with, while employing the eyes and other organs for further information, we can tell what it is we're holding and the amount of pressure and friction applied on the object as well through a diverse combination of sensory information. In my research I aim to get robotic hands closer to human ones.

Concept：If robotic hands could come closer to human hands, robots would be able to take on a variety of tasks

-- Up to now you've had experience with industries and research facilities both domestically and abroad but what was the deciding factor for joining OMRON?

Felix: I've had many opportunities in which I've felt that more than basic research my aptitude lies in applied fields. From there I began to think that I'd like to not just do research but to implement that research in connection to business applications. It was at that time that OSX got in contact with me. In terms of conducting research in the Japanese industry, there certainly is the idea that compared to industries and academic institutions abroad, Japan lacks in freedom. But after joining OSX I've been able to work quite freely. I've been able to come up with subjects for independent research, attend and present papers at conferences. Also, the other researchers and engineers I work with at OMRON are all topnotch so it's very stimulating. My field of research and the direction of OSX are also in line with one another. More than anything else I appreciate OMRON's ideal of continually approaching societal needs through technology and business. I'm fully enjoying my work each day.

-- Let's go back to talking about robots. In a number of places one hears that enhancing the capabilities of robots is extremely difficult.

Felix: The biggest problem is that presently robots cannot completely apprehend the world humans see. In the case of humans we apprehend a situation, think about how we want to tackle it, try an approach and determine whether or not it works. Robots can't do these things. In order to teach robots humans have to tell them what went wrong. And since even teaching them what went wrong is different from the way in which we would teach a human it's just a very difficult thing.

-- In the future what level do you think industrial robots can advance to?

Felix: In terms of physical ability there are aspects in which robots surpass humans. But as far as intelligence is concerned we're still at the stage of trial and error. In a specific environment performing a specific task today's industrial robots can surpass humans in speed and accuracy but they can't comprehend abstract commands; and once their environment changes they're unable to adapt to it. However, looking to the near future it's certain that if we can continue to expand the range of things robots can do, the jobs we can entrust them with will gradually increase. In that case, I think that human beings will have a relationship that plays the role of supervisor for robots. I think our research will endeavor to make a big contribution to OMORON's goal of realizing a harmonized future between humans and machines.

The automation of the screw tightening by robot

Ramping up development by participating in a competition

Felix: The industrial robotics category we've entered is contending with the limits of what's possible by today's robotic standards. Using multiple parts like moldings, screws and rubber rings in sequential tasks, we compete and see how far robots can go in correctly placing, attaching and fastening things. This work is highly meticulous work for a robot, so I feel that realizing the acceleration of robotic development is a huge challenge.

-- It won't only be just OSX but you will also be teaming up with places like Osaka University, the National Institute of Advanced Industrial Science and Technology and SenseTime Japan.

Felix: The collaboration between universities, businesses and organizations conducting research in a variety of areas is one of significant aspect of participating in the WRC. By combining our skills and expertise we can achieve a higher level than a single company could on its own. Two times a week we set aside a core time during which we geographically separated colleagues can talk to each other whenever we want to. I hear there are 16 teams in total competing so that means we have 15 rivals. Over course we're aiming to win.

-- We're looking forward to the results. Thank you for your time today.