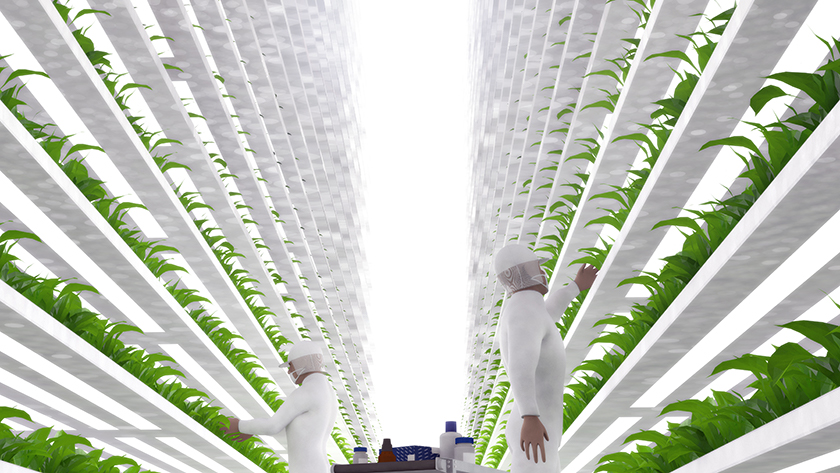 Tackling the Food Crisis with a Borderless Collaboration

Creation of an environmentally conscious and sustainable method of urban farming

Soaring prices of vegetables has become a problem in today's world at a societal scale. Causes range from extreme weather, decline in labor force in the agricultural sector, the high prices of fuel necessary for transportation of produce, and food waste amounting to billions of dollars on an annual scale.

Our current production cycle in which such problems persist, is far from being sustainable. Formulation of a more environmentally friendly method of food production calls for urgent action. This article follows Kassim Okera, who was part of a project to take on this great task.

After graduating from university in London, Kassim joined the largest specialist distributor of control and automation products in the UK, where he worked on numerous large-scale projects. He decided to leave however, to join OMRON Electronics as field sales engineer in 2015, as he had always felt that he wanted to contribute to society from a business development standpoint. At OMRON, opportunities to engage with new challenges are abundant; the varying projects involve not only control equipment but also healthcare and mobility as well as initiatives to actively employ disabled persons. For Kassim, such projects at OMRON were indicative of the company's resolve to solve social problems. The impression that OMRON was a global company with universal values beyond commercial interests was what led him to decide to get onboard.

At that time, Intelligent Growth Solutions (IGS) had begun working on "automated vertical farming" to optimize crop production. IGS is an emerging agritech company on the front line of innovative technologies for the Indoor Farming sector. Based at the James Hutton Institute in Scotland a leading crop science and research institute, the opportunity to collaborate was one of the key considerations in this location. To advance the efforts to practical application level, IGS needed an automation solutions provider.

In search of a suitable provider, IGS found OMRON. In addition to its solutions, OMRON's commitment to social responsibility attracted them into collaboration.

With the addition of OMRON's automation technology of to the expertise and knowledge of the two organizations, the first-ever UK project for automated vertical farming using IoT was initiated. Kassim was assigned as project leader on OMRON's side. His passion for his work increased by the day as he deepened his understanding of his partners' enthusiasm toward the project.

In the beginning, developing an understanding of the project was particularly challenging, as it was unprecedented so that previous case studies could not be found. Despite this, Kassim took on the project, led by his determination to respond to social needs through business.

Automated vertical farming as a solution for food security

Vertical farming makes efficient use of space. The market is estimated to expand to 6.4 billion USD* by 2023 (23.6% CAGR), and is therefore attracting increasing attention.

The environment of an automated vertical farm is constantly monitored by an automatic system. It is based on IGS' patented system of growth trays with lights, managed by their patented Power & Comms platform. The whole system is managed by IGS' Total Control Environment Agriculture software and automation processes which utilise OMRON's Systematic Architecture (Sysmac) technology based on NJ/NX machine automation controllers as well as LD Series mobile robots

The four main advantages of automated vertical farming are the following:

Of course, the road to completion of the project was not smooth. Kassim, in charge of making proposals related to the system, encountered issues that were unexpected from his previous experiences. For example, the agricultural sector had an entirely different culture and lexicon from what he was accustomed to. He had to first learn about the industry before being able to make proposals regarding technological challenges.

"I had to put myself in a different mindset, and constantly keep watch for updates and new developments in the field. In addition, the project proceeded without pause, and it was not at all unusual to have to reformulate proposals and approaches," reflects Kassim.

Kassim says that despite this, he somehow maintained a high level of motivation throughout the project.

"I believe this was because I was determined to contribute to society from the business side. There were concerns, because this project required long-term commitment, but the OMRON team understood the global impact and importance of the objectives. They were positive and supportive throughout. Three years since initiation, and the system has been launched to the market. The efforts are finally coming to fruition," says Kassim.

The unrelenting determination to solve a global issue

"Collaboration with other companies holds infinite possibilities for innovation," says Kassim. This project, for example, led to the creation of a truly sustainable food production method through the integration of knowledge from plant science, automation technology, photonics and power management. Even in an urban environment where securing farmland is difficult, it would be possible to have a stable supply of crops through the introduction of vertical farming.

Of course, Kassim's journey does not end here. He plans to work with the IGS team to incorporate further AI and machine learning capabilities for a fully automated farm. With this technology, once seeds are sown, crops would automatically grow to the state ready for harvest. The global issue of food security and the declining labor force has potentially found part of its solution.

Automated vertical farming is still under development, and many problems must be addressed before reaching such a level. However, through a borderless and passionate collaboration, there is certainly is will realize someday. "We can definitely make it happen," affirms Kassim.