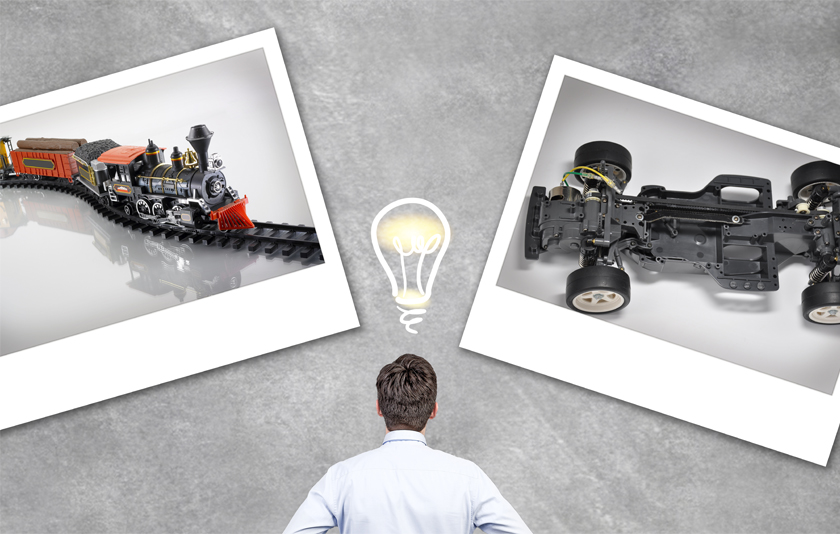 Can an employee's hobby lead to a revelation in the workplace?

A unique variation on the conventional production line, a shared hobby among development members - radio control and plastic models -

The world of manufacturing is in for a potential upset due to a new low-cost and miniaturized production line, created from commercially available model parts.

Client's desires for their production infrastructure can be realized quickly, cheaply and with high quality.

As the world's needs diversify, there is increasing demand for the manufacture of small quantities of products. Small production runs, however, lead to high costs due to the expenses associated with setting up a production line. OMRON was approached by clients requesting technology for high-quality, low-volume production lines which could be modified rapidly and had low initial setup fees.

In order to meet these expectations, a new project was launched within OMRON. The assigned members came from the switches and sensors design department. Within their department they were also facing the issue of small quantity production runs, leading to added incentive for the success of the project to assist their own clients.

Model trains and radio control motors, the flexibility and power to realize an idea.

Initially the team had trouble finding a solution which fit the client's needs.

"Most manufacturing robots have an excessive number of functions, most of which were unnecessary for our project. We wondered how we could simplify the production line components to the bare minimum for what we needed. Our thoughts turned to model trains and radio control models which are small, simple and designed for efficiency of use."

Mr. Matsumoto and Mr. Ishikawa, members of the development team, had known each other before the commencement of the project. They often used a common point of reference, their model train hobby, to form analogies in their work.

During one such discussion they were hit by inspiration, why not apply their knowledge from their hobby directly to the problem at hand.

"Wouldn't it be possible to create a small-sized, low-cost line using common parts found in a remote-control model and the rail from a model train?"

Enthusiastic with their idea, they shared it with the team who immediately set to work to test its feasibility. 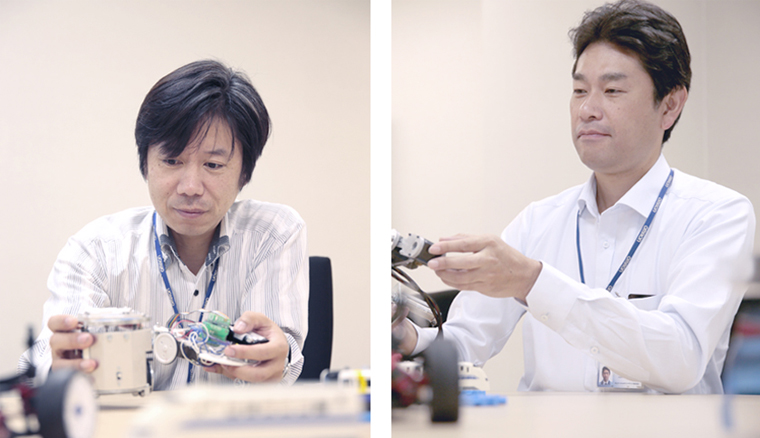 Three years of trial and error, an embarrassing development process.

Despite the support for the idea to take the project in a direction using model components, the development process was not smooth.

The biggest issue the team faced was durability, consumer parts were not rugged enough to create a production line. This lead the team on a long path of trial and error, testing the long-term reliability and functions of various consumer grade parts. The sight of a team of adult men experimenting with model trains and remote controls at the workplace led to some embarrassing incidents however, the team maintained the mindset that, in the end, those around them would be surprised by the result.

This shared focus on their common goal of success led the team to finally reach their development goal, a miniaturized, low-cost production line. The final system, which consisted of some manual and some automatically operated sections, met all of the initial criteria being simple to assemble, flexible, and compact enough to be transported in an elevator. Instead of material traveling along a conveyor, a robot called a platen carries the items on rails along the production line. Using a P & P (Pick & Place) system, components are added to the item throughout the production process. The P & P uses a radio control motor and the line itself uses the rail from a model train set. 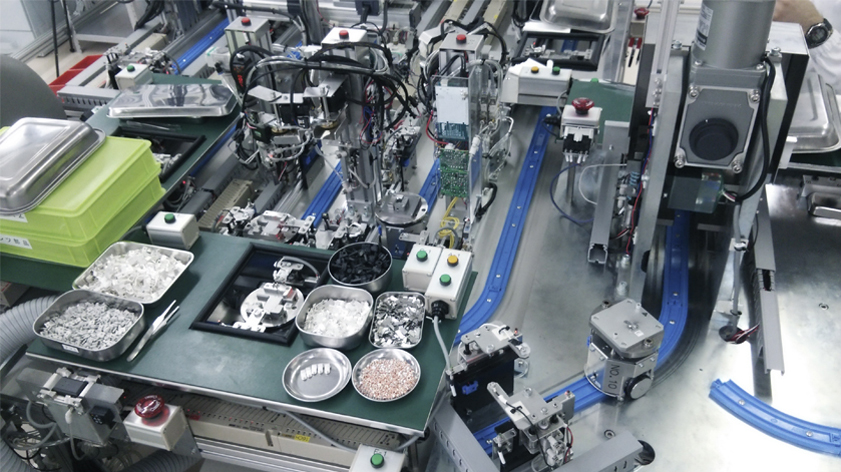 After three years of trial and error, a satisfactory production line was finally created. The team members faith in ideas, faith in technology and, most importantly, faith in their ability as a team to realize their end goal, combined with their efforts to source readily available consumer parts with the best quality and durability allowed them to create such an excellent final product.

Evaluated highly from the outside and within, flexible thinking and simple design.

The finalized solution was first demonstrated at an internal company briefing. Initially skeptical, onlookers took on expressions of expectation when the concept was explained to them. Common sentiments were, "I could feel the innovation in the system" and, "to create a system like that from the parts they used was amazing." The team received great praise from researchers and engineers inside the company. Client evaluations led to the greatest praise the team could have hoped for, the system being implemented onsite at the client's manufacturing facilities. One client commented, "We were just starting to get into discussions with another vendor, but seeing the innovation displayed in this system, I now want to expand our business relations with OMRON." 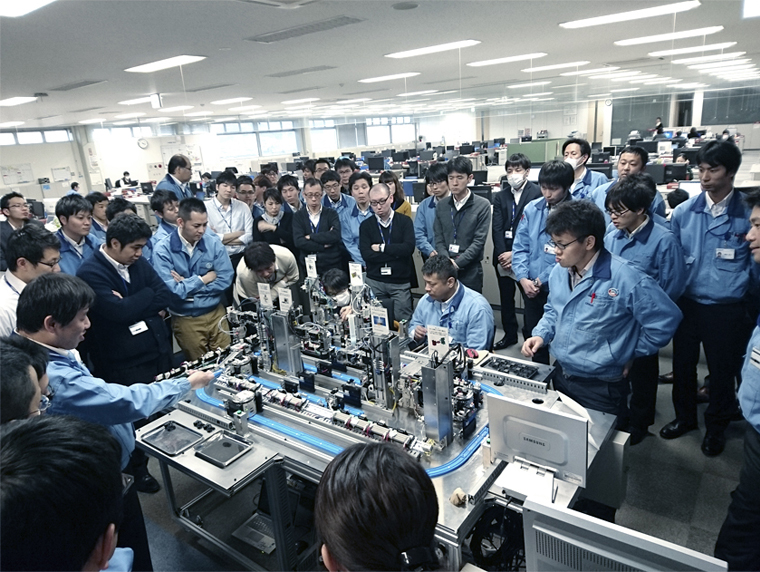 Despite success at numerous production sites, development continues on the low-cost, miniaturized production line. As a newly developed system, there are still some challenges to overcome but many have high expectations of its usefulness, "Maybe one day we will use it as a new production platform within OMRON?"

This project represented the spirit of "monozukuri" (manufacturing) very well, from its initial concept, born out of ingenuity, to the hard work and trial and error involved in its development. There are plans to introduce the system at various manufacturing sites in the future which could lead to a production revolution in the same way that smartphones disrupted the communications and personal device market through their miniaturized, flexible technology. 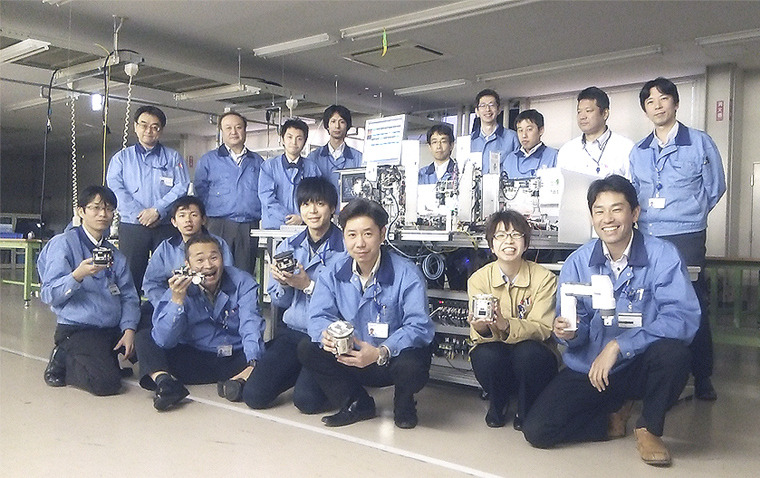