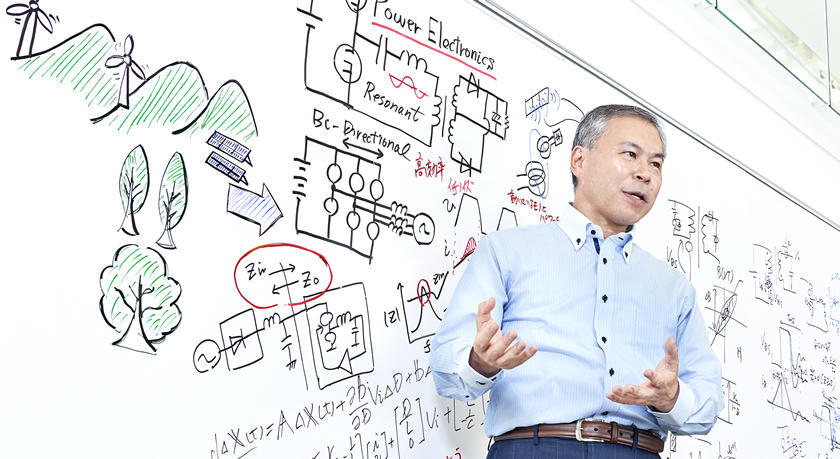 A veteran power engineer's dreams passed on to the younger generation

Picture yourself sitting on a hot summer day in a nice cool air-conditioned room with your chilled beer or juice just taken from your fridge. You are eating your favorite snack which has been heated in your microwave while watching TV or using your PC or smartphone.

All of these creature comforts of 21st century life are made possible by electronic products, a situation set to increase with the rapid spread of robots, drones, electric cars, etc.

To the end user the act of turning on this myriad of modern devices is as simple as flicking a switch. Few are aware of the true effort going on behind the scenes to make such simplicity possible. One of the key challenges faced by engineers to facilitate this modern lifestyle is that of power distribution and, more specifically, power conversion. Dr. Toshiyuki Zaitsu (engineering) of OMRON intellectual property headquarters is one such engineer who has left his footprints throughout the industry. 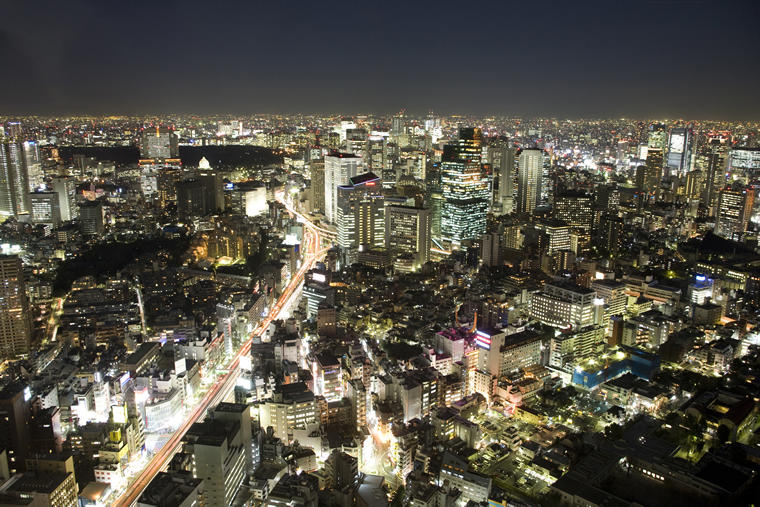 Why are power supplies which are capable of converting electricity important? To understand the answer to this question one must understand that there are two primary types of power, direct current (DC) and alternating current (AC). Most small electronic devices, such as smartphones, operate with low voltage DC power. The electricity being sent into the home however is at 100 or 200 volts AC. Putting this high voltage AC power into a small DC device without first converting it would likely destroy the device.

This necessitates converting high voltage AC into a more suitable form for use with industrial machinery/equipment, including devices in the home. The branch of engineering concerned with this process is called "power electronics". As a global leader in this field Dr. Zaitsu has worked at seven companies, both in Japan and the United States, over the last 30 years. He has been at the forefront of the evolution of power control in various industries including communications, industrial machinery, semiconductors and consumer electronics. It is one of his life goals to reduce waste caused by power conversion.

An iconic device, the personal computer, shaped by those working in power conversion. 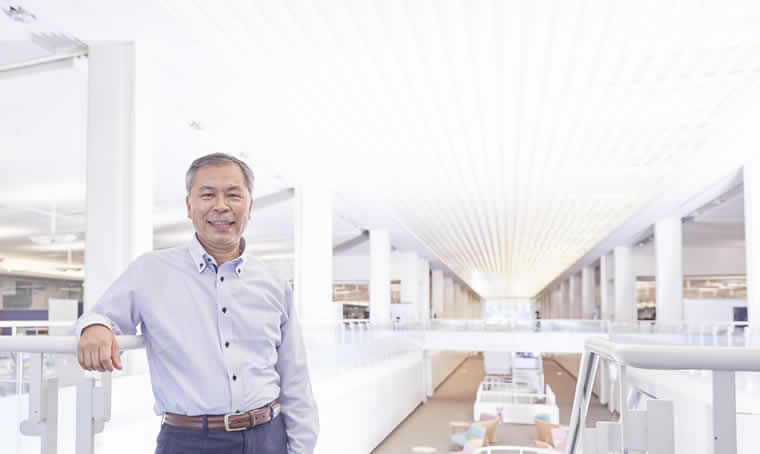 Power conversion is not a simple process. The type of current and the magnitude of the voltage required can differ on a product to product basis.

To accommodate the different requirements of various devices there are two primary types of converter. The first is a converter which changes alternating current (AC) into direct current (DC). The second is an inverter which converts DC to AC. Converters and inverters are two sides of the same coin, they both play the role of changing electricity from one form into another.

"Manufacturers working on both converters and inverters are few and far between. At OMRON we are at the top level of the industry in both. With OMRON leading the charge towards social knowledge and change we have, over the years, cultivated specialists in power conversion by using our experience to tackle problem solving on a global scale." Said Dr. Zaitsu speaking on what he has achieved since joining the company three years ago.

One of the most successful inventions in the field is the piezoelectric transformer which uses mechanical vibrations to control a power supply. Laptops, in particular, have benefitted from this technology. The power circuitry of the screen of a laptop used to make up a significant portion of the device's weight. With the advent of the piezoelectric transformer it was possible to greatly minimize the screen's power electronics while improving performance and increasing the visible size of the screen. 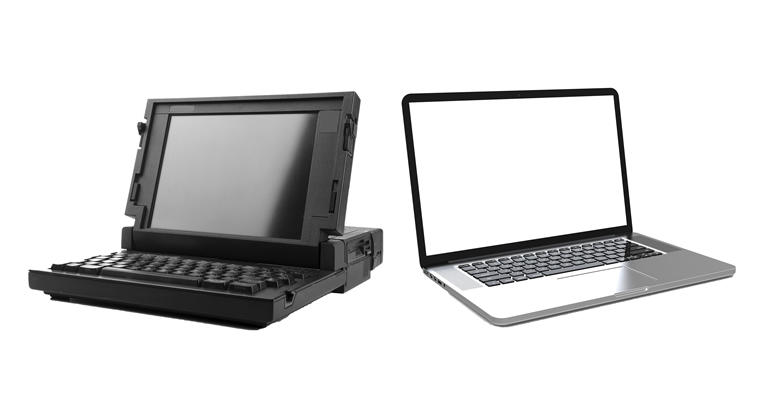 A comparison between an old laptop computer and a modern model.

Dr. Zaitsu is currently working earnestly with his colleagues to make new breakthroughs in power electronics. If, for example, the efficiency of electronic vehicles can be greatly reduced then they will be able to run for much longer on one charge. Present efforts include the concept of "motorized integration" which is combining the motor and drive unit together leading to a great reduction in size and improvement in efficiency.

With environmental protection becoming a global hot topic, energy saving has become an urgent social issue. Transportation equipment accounts for more than 20% of the world's total CO2 emissions, improvements to the efficiency of automobiles is seen as a vital step for the future. OMRON is helping the world along this path through its work on minimization and energy savings.

On the wings of a bird. Moving towards the future with young engineers, a culmination of the concept of the power conversion engineer. 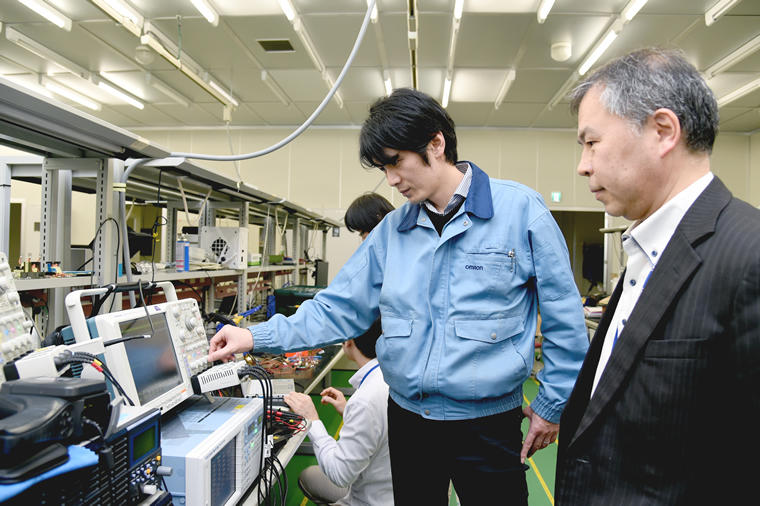 Machine integration is another topic which OMRON is intently working on as global focus shifts more and more towards power electronics. This is one of Dr. Zaitsu's dreams with the ultimate goal being to eliminate the power systems from devices entirely.

This dream began over 30 years ago during a discussion about the future of power electronics. Dr. Zaitsu envisioned devices which would function without the need for a power system, with the power being delivered as though by a stork. He felt this would represent the ultimate technology.

It is no surprise that, as the number of moving parts continues to increase in devices such as robots, electronic vehicles and drones, the importance of miniaturization and energy conservation continues to increase. The concept of the "stork" delivering the power has never left his mind. The idea of the stork delivering power is directly in line with Dr. Zaitsu's concept of OMRON's young power conversion engineers delivering their expertise to the future.

Another word Dr. Zaitsu holds close to his heart is waste. One of the things he is most proud of is that his power conversion engineers always design systems to use a minimal amount of energy. While in the United States Dr. Zaitsu was surprised by American's lack of understanding of the term wasteful.

There is a Japanese concept "motai-nai" which encompasses the idea that even the smallest of waste is unacceptable. This attitude, when applied to power electronics, may give the Japanese the key to future developments in the field. 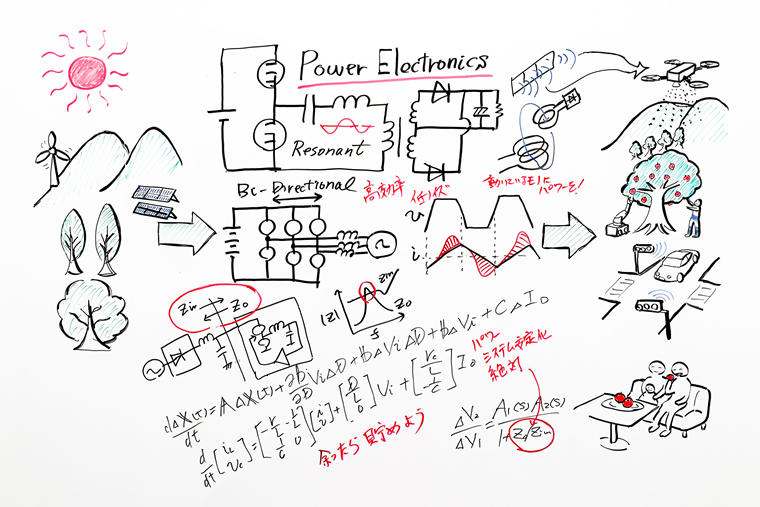 A diagram by Dr. Zaitsu showing the concept of the conversion of natural energy for use in daily life without waste.

Dr. Zaitsu states, "I would like to contribute to the preservation of the global environment by developing more efficient power supply systems." This is the mission of a person who has long led the world in power supply system design. It is also his strong belief that, "OMRON can do it." Dr. Zaitsu bases this belief on OMRON's strong focus towards supporting young engineers and their focus on both converter and inverter technology.

"Before joining OMRON, I had the opportunity to work with some young engineers at the company. I was very impressed by their attitude to solving social issues, this was something which stayed with me. Since joining the company my impression of the staff here has not changed. I want to fulfill my dreams while helping them fulfill theirs." Says Dr. Zaitsu.

It would not be an exaggeration to say that, when it comes down to it, the future of the global environment may hinge on power electronics. OMRON's young engineers, infused with the ideas and passion of Dr. Zaitsu, look to a future where nature and society can coexist.

The year 2020 will be remembered for the distancing--both physically and psychologically--between companies and their employees throughout the world, as working from home became the norm in the wake o...

Thinking Together About Our Vision for the Future

On January 25, 2021, an online event "OMRON Human Renaissance Vol. 1." was held. Enhancing human creativity and potential and striving for a world of harmony between humans and machines, OMRON held th...